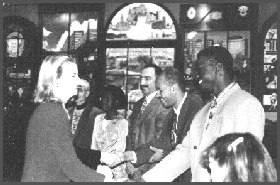 In my opinion, one of the finest examples of the coming together of many nations and cultures was an event that occurred on Monday February 17, 1997 at the Kitchener City Hall Rotunda, celebrating 50 years of Canadian Citizenship with the passing of the Canadian Citizenship Act in 1947. During the week of February 10-17, citizenship courts were held in both public and separate schools, as we welcomed new Canadians with citizenship. In each court twenty new citizens were welcomed as Canadians and joined in the bond of commitment and loyalty which unites all Canadians.

The Judge emphasized the four important characteristics that new citizens expressed to him were their first impressions of Canada:

Judge Sommerville charged the new citizens with the responsibility to be protectors and promoters of these four characteristics of Canada, which were so important to them and to ensure that their children and grandchildren, as well as new immigrants, continue to find these things to still be true in the years to come.

Those of us who perhaps have taken these four things for granted were moved to reaffirm our committment to uphold them alongside our fellow ‘new’ Canadians.

As all of us repeated the oath of Citizenship and sang our national anthem together, I could not help but believe that there is no finer expression of us crossing the barriers of many different cultures as we joined together at that moment as Canadians

Editor’s note:
I wonder how many Canadian-born truly feel the significance of being handed a ‘document’ that, in reality, marks the beginning of your second chance at life !