José Rivera came to Canada seven years ago from El Salvador where he had been an architect. He has studied and visited the majority of the countries referred to in the article. Over a number of years he also did studies in history, theology, archeology, architecture and urban sociology

Half of these countries are on the mainland of South America. Geographers, especially, include in the general expression Latin America, the possession of the European States in the hemisphere (the three Guianas, Jamaica, Trinidad and British Honduras – Belize), since all of these areas were once claimed by Spain.

Puerto Rico, a Spanish colony for four centuries but now a part of the United States, may also be included, under the term Latin America. In 18 of the 20 countries Spanish is now spoken; Portuguese is the language of Brazil, and French has been used in Haiti since it first became a French colony. Paraguay, because of the great number of Indians, also uses Guarani as an official language. 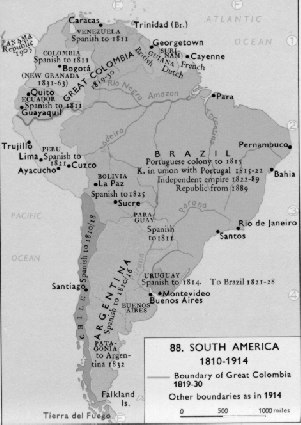 The term Latin America does not satisfy everyone. Those who think in terms of Iberian background prefer Ibero-America to Hispanic America. In referring to some countries of high Indian population, such as Paraguay, Bolivia, Peru, Ecuador, the Central American States and Mexico, the expression Indo-American is often used. But for the sake of convenience in referring to this area of the world, the term Latin America is also accurate. Although each country has its own separate and distinct national characteristics, taken together they have . . . a common European origin, a common colonial background, a common history of related movements for independence from their colonizing countries, a parallel (development of national institutions, a similar history of republican forms of government (with a few instances of monarchical governments), a language with a common root, a common psychology and a way of life, a predominant common religion- the Roman Catholic, a mutual respect of one another, an inclination to co-operate in inter-national affairs, and a certain solidarity and uniformity in foreign policy, induced at times by a common suspicion with a mix of fear of the great neighbour to the north, the United States

The ethnology of Latin America differs from a region to another, according to the peculiar history of each and its predominant social and economic character: industrial-urban, industrial-rural, pre-industrial Iberian or pre-industrial nature. Cultural traits of the Indians, Europeans and of the North American whites, Asiatics, Blacks and Mestizos.

Mestizo culture is distinct from North American culture in its emphasis on traditional forms, the Indian words and traits it adopted, feudalistic European survivals from Spain, mysticism and medieval scholastic intellectual patterns regarding the sexes, the family, the political forms and economic activities. Ideologically, it is humanistic rather than puritanical; Intellectually, it is characterized by logic and dialectics rather than empiricism and pragmatics; it assigns great value to the manipulation of words and other symbols; it emphasizes ‘form’ and ‘symbol’ rather than the ‘thing’; it has a ceremonial kinship system of “ god-parenthood ”, the extended family functions as a unit in political, social and business affairs.

Blacks : while there are scattered concentrations of blacks and mulatto populations in most of the Latin American countries, (particularly in the port towns) Haiti, which is almost 100% blacks, Cuba, Trinidad, the Dominican Republic, British Honduras – Belize – and Brazil are where the Black population is heavily concentrated.

In Latin America there has been a widespread correlation of landownership with social class, the large hacienda or owners of plantations being socially on top, small landowners and share croppers next, day labourers and squatters at the bottom.

With the exception of western European-oriented areas centered around cities like Mexico City, Rio de Janeiro, Buenos Aires, Sao Paulo, Montevideo and many others, the Latin American economy is non-industrial. Industrialized cities are the exception; rural agricultural and non-industrial towns and cities are the norm. Industrialization, however, is inevitable, and it is bringing more and more beneficial changes to social structure, economy, family life, religious concepts and politics

Organized movements designed to improve the welfare of the people and the social services available to them, are of the utmost variety. In this respect, the various countries have little in common except that the developments are recent, significant groups are feverishly at work, and the difficulties confronted are tremendous. Nations which have experienced little social change prior to World War I, and comparatively little before the end of World War II, are the scenes of intense activity designed to improve a lot and increase the security of the population.

The rapidly changing status of women throughout the Latin American countries is another striking development taking place during the second half of the twentieth century. Until the close of World War I, and in many parts of the area, even later, the rights and privileges of women in Latin America resembled those of the middle ages of western countries. The women of the lower classes shared their mate’s service or semi-servile status, and those in the small middle and upper classes were under strict surveillance. As children and adolescents married young and were limited largely to careers of childbearing and homemaking. Formal education was almost entirely confined to women of the upper classes, and it was most frequently by private tutoring or in a convent school, with limited subject matter to that considered befitting a wife and mother.

During the second quarter of the twentieth century, noticeable changes in the status of women began to occur, and in the third quarter these were progressing rapidly. The development of industry and the expansion of trade and commerce is creating thousands of new kinds of jobs in offices and shops.

The women watch television of North America and Europe, which gives them vivid pictures of the ways of life of women in other countries, so many are quick to adopt practices portrayed on the screen- along with all this goes the expanding enrollment in high schools, colleges and universities, and the entrance of women into some of the established professions, such as medicine and dentistry; Social work activities are also providing new jobs for hundreds of women. Politically, there has been agitation for equal rights, freedom and feminist movements

In Spanish America, federalism was usually supported by liberal parties and associated with proposals for reform which appeared to be radical – especially those aimed at the church and at economic policy, rather than by conservative parties as in North America.

The Democratic movement was handicapped by political traditions and ethnic heterogeneity. The spread of democracy seemed to imply ‘social revolution’, the old ruling groups often formed political alliances with military adventurers who seemed able to restrain the popular tide, yet inadvertently contributed to its growth. The amount of social and labour legislation placed on the books already is enormous, and it is steadily increasing.

Efforts to improve health and sanitary conditions are being extended from the cities to remote rural districts; there are widespread efforts, both public and private, to provide housing for the masses and women are gaining a status closer to that of their sisters in western nations. In all these developments, the efforts of the Latin Americans themselves are being encouraged and, to a degree, supported, by the Organization of American States, the Agency for International Developments, European Economic Community, the Bank of International Development, the United Nations and other supporters.

The history of human evolution is essentially the history of culture – the process by which humans developed and adapted to the demands of their environment. While accepting culture as an important factor in shaping human life, sociologists stress in their view the genetic programming over which humans have little direct control over – which is the dominant factor in human adaptations, selection, and behavior. While genetic factors may account for some kinds of cultural adaptations, we must always remember that cultural differences that exist among groups of people have emerged out of the social life of those people, regardless of the source of cultural differences, culture is the shared meanings that are attached to behaviors and symbols for a particular people