In 1949, the People’s Republic of China sent troops to invade the country of Tibet. After ten years of trying tp reach a peaceful resolution with China, the Dalai Lama, Tibet’s spiritual and temporal leader, was forced to flee his homeland and seek political asylum in neighboring India.

Nearly 100,000 Tibetans followed the Dalai Lama into exile and thousands, including children, continue to make that treacherous journey over the Himalayas each year in search of refuge. However, for the remaining 5 million Tibetans still in Tibet, there is no escaping China’s deliberate policy of ruthless oppression of the Tibetans.

During the over 40 years of China’s occupation of Tibet:

* 1.2 million Tibetans (one fifth of the country’s population) are dead and many more languished in prisons and labor camps,

* Gross human rights violations – starvation, execution and torture continue to this day and Tibetans are routinely imprisoned for just expressing their views,

* Freedom of religion is severely curtailed,

* Nuns have been brutally raped in Chinese prisons,

* Nearly all of Tibet’s monastries (6,000 of them) and other cultural and historic buildings have been destroyed and their contents pillaged, 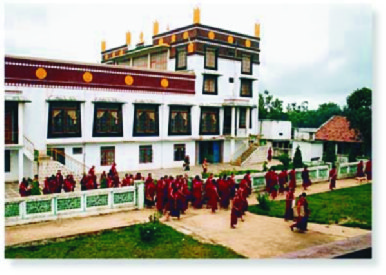 His Holiness the Dalai Lama and the Tibetan government-in-exile have worked tirelessly to bring the suffering of the Tibetan people under Chinese occupation to the world’s attention.

The Dalai Lama’s efforts as a champion of world peace have been recognized with the award of the Nobel Peace Prize in 1989.

The Dalai Lama was equally clear in his statement,

“.. there is an attempt to destroy the integral core of the Tibetan civilization and identity. New measures of restrictions in the fields of culture, religion and education, coupled with the unabated influx of Chinese migrants to Tibet amount to a policy of cultural genocide”

Historically, Tibet lies at the centre of Asia, with an area of 2.5 million square kilometers. It is the homeland of six million Tibetans, and it is a separate nation with a distinct culture, religion, language, laws and customs and has maintained its own government.

Tibetan Buddhism is practiced by 99% of the population.

The international community reacted with shock at the events in Tibet.

The issue was discussed on numerous occasions by the UN General Assembly between 1959 and 1965. Three resolutions were passed condemning China’s violations of human rights in Tibet and calling upon China to respect those rights, including Tibet’s right to self-determination.

The Tibetan people’s determination to preserver their heritage and regain their freedom is as strong as ever, even though the situation has led to confrontation in Tibet and to large scale Chinese international propaganda efforts.

In 1987 further deterioration led to open demonstrations against Chinese rule in Lhasa and other major towns.

The Chinese military and civilian build up is also of great concern to India’s direct security.

Tibet had acted for for centuries as a buffer between China and India and the increasing presence of China in the Himalayas will now be affecting many Asian nations as well.

In recent years, and especially since the Nobel Peace Prize award to the Dalai Lama, the concern shown by governments in Europe and America has grown considerably. However, China’s pressure tactics have thwarted efforts to make substantive headway to resolve the issue, and Tibet has continued to pay a terrible price for the world community’s failure to seriously challenge China on its behavior there.

The situation is increasingly tense as thousands of Tibetans continue to be imprisoned merely for their political or religious activities, detainees are being tortured regularly; and Tibetans are rarely permitted to leave the country-and access to Tibet by exiled Tibetans is also limited.

Is there still hope to save Tibet?