Kegham Papazian was born in Alexandria, Egypt and attended the Melkonian Kindergarten then the Boghosian Armenian School after which he attended the British Boy’s School (el Nasr). Worked at Patisserie Delices as assistant accountant in various capacities. 1973 started work at Thomas Cook Travel Agency both in the main office and at World Health Organization location.  In Canada, he worked at the Royal Bank, Payroll department and afterwards at ADP Canada in the Payroll, Banking and Finance department

Bishop Ashot Mnatsakanyan, Primate of the Diocese of Egypt 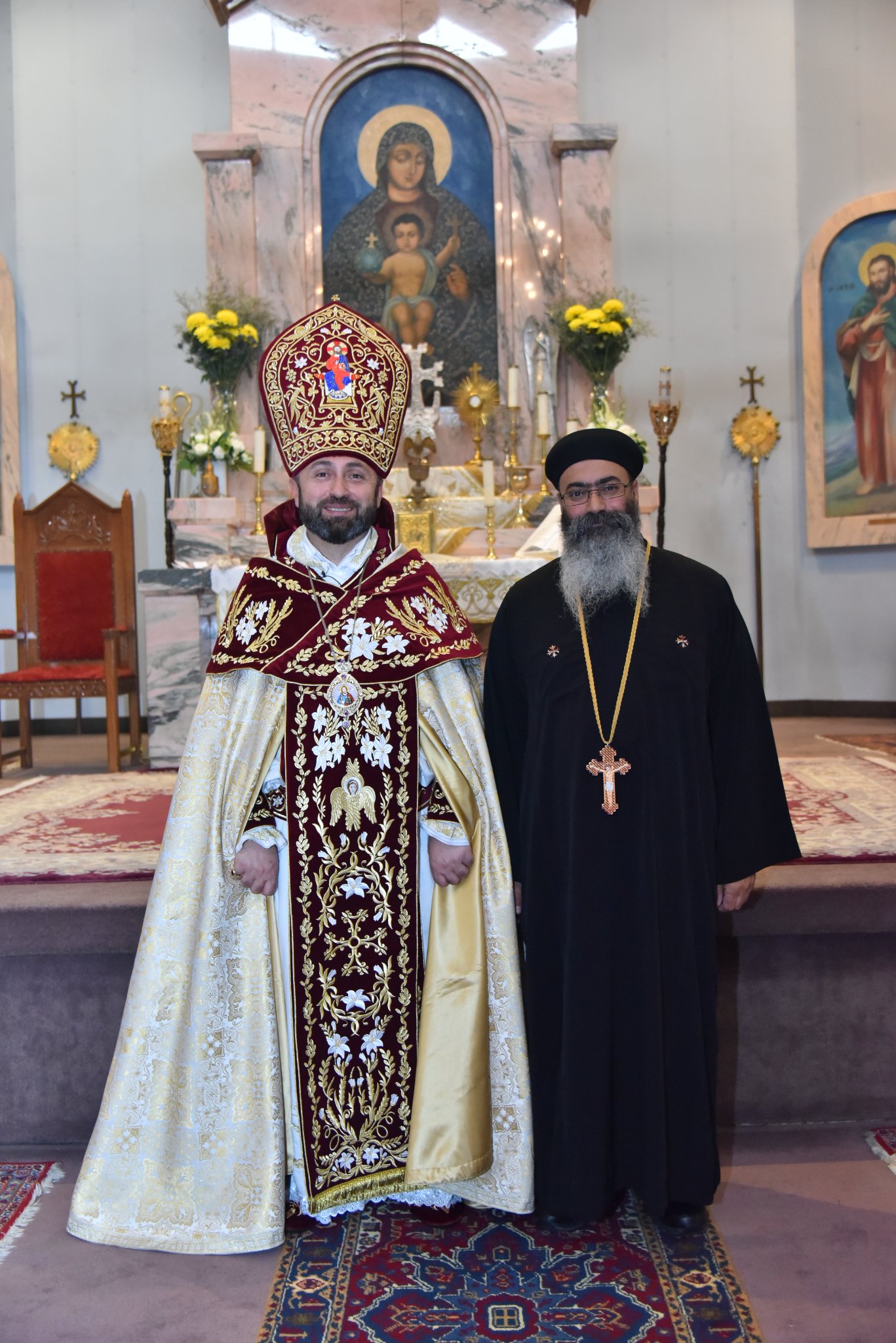 Bishop Ashot Mnatsakanyan, Primate of the Diocese of Egypt

A lunch and special program was held at the Magaros Artinian Hall of the Holy Trinity Church on 05 June 2022 in Toronto.

The event was dedicated to the Egyptian Armenian community on the occasion of the visit of Bishop Ashot Mnatsakanyan, Primate of the Diocese of Egypt. The attendees were happy and excited.

The event started with the Canadian Armenian and Egyptian National Anthems with more than 160 Egyptian Armenians in attendance.

It was held after the Holy Liturgy and started with the blessing of the tables. 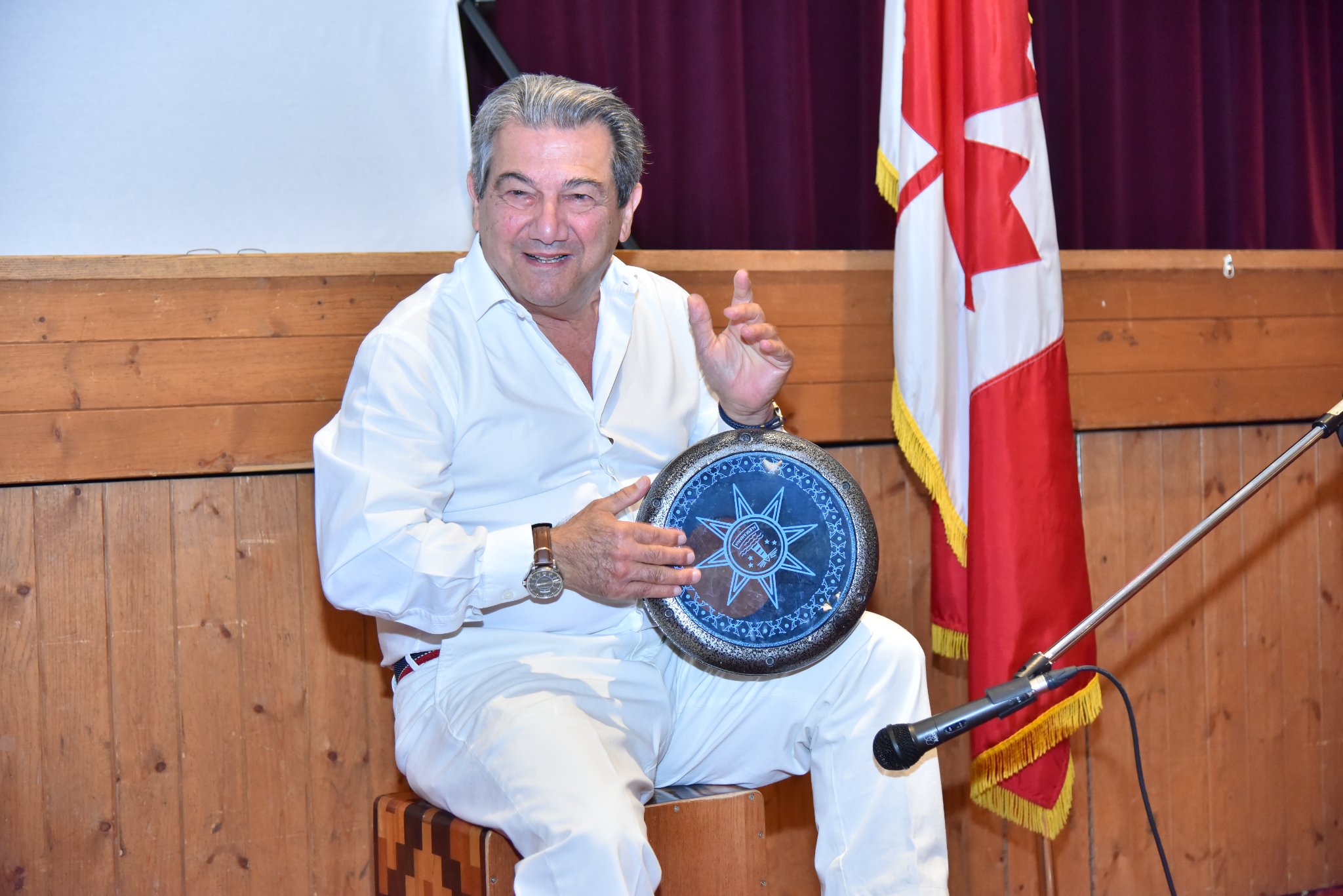 A voice over video clip by Salpy Kadjemian and Lora Tachjian called “Egyptian Armenians Through the Ages” was shown, followed by a slide show with photos of the Armenian community of Egypt cultural and sports clubs and places of interest, with background Arabic and Armenian instrumental music (provided by myself, Kegham Papazian)

His Grace Bishop Ashot Mnatsaganian addressed the audience and stressed the importance and vital role of the Armenian community of Egypt, expressed his joy for being with the Armenian-Egyptian community members and gave a brief description of the current community of Egypt. He said that he resided in Egypt in the last 20 years and speaks Arabic, has Egyptian identity card and passport. He was heard singing the Egyptian National Anthem “Beladi, Beladi”!  We found him to be a very pleasant and charming personality.

Also in attendance was His Grace Abgar Hovakimian, Primate of Armenia Apostolic Church of Canada. 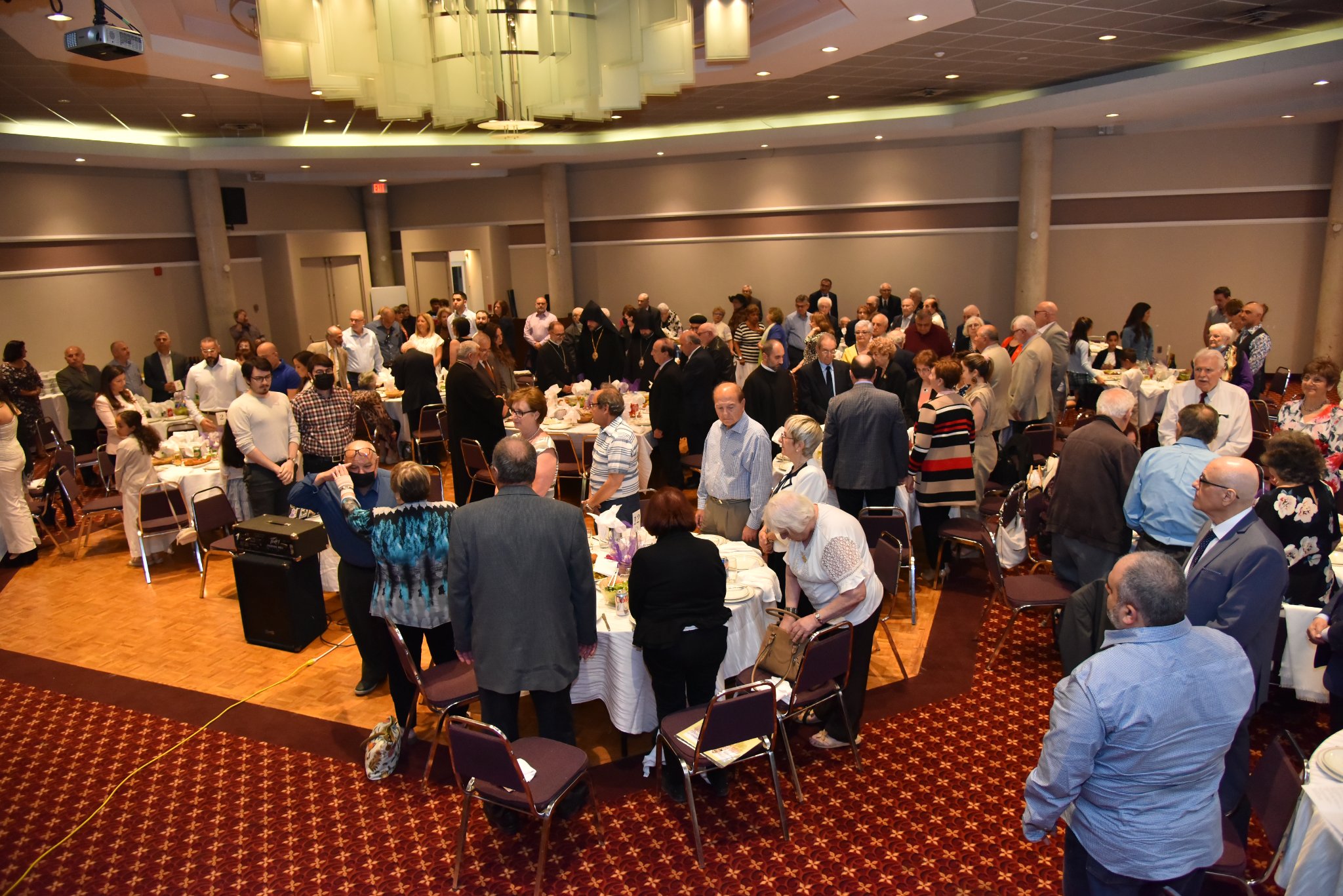 The attendees took photos with His Grace Bishop Mnatsakanyan. Reverend Father Zareh thanked all the members of the organizing committee and asked them to come to the stage and be recognized their efforts in making this evening a great success.  It was an unforgettable and pleasant evening.
Bishop Hovakimian praised the role of Egyptian Armenians and closed the ceremony with a prayer.

This is a very amazing story. After 80 years, the descendants of two families, who did not know each other, met by coincidence through Facebook and found out that their grandparents, were connected.

Serge Enokian’s grandmother Anna, was a three years old child whose parents were murdered by the Turks during the Hamidian Massacres, reference to the red sultan Abdel Hamid, during which 300 thousand Armenians were massacred in Turkish occupied Armenia during 1894-1896.
The family nanny, in order to save the child, wrapped her with laundry and placed her in a British ship docked in the harbor, most probably s/s Lusitania, which was scheduled to sail the same day from Constantinople to a British port via Alexandria, Egypt.

Next morning, the sailors heard the cry of a baby, went to inquire and discovered a baby girl. They found an inscription in English indicating her name and the fact that her parents were Armenian. 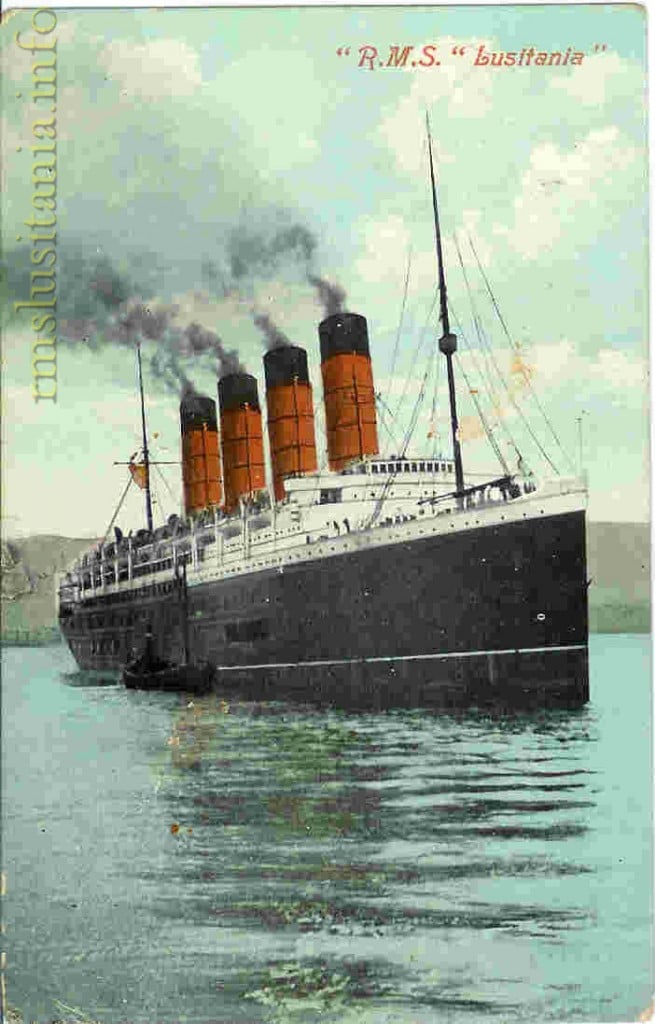 Upon the arrival of the ship in Alexandria, the crew members were able to locate “The Armenian Sisters” charitable organization and gave the child to the care of the Armenian nuns to raise her.

On the other hand, Serge Enokian’s grandfather, Levon Enokian, (whose parents were from Tbilisi Georgia) had earlier fled from Constantinople and landed in Egypt. When Levon was 19 years old, he managed to open a travel agency in Cairo called “Agence de Voyage L. Enokian” in Rue Champollion and a second one in Alexandria in 1 Midan Saad Zaghloul.
Several years later, he met Anna, who has grown up to be a beautiful young girl and after a short courtship, they married. 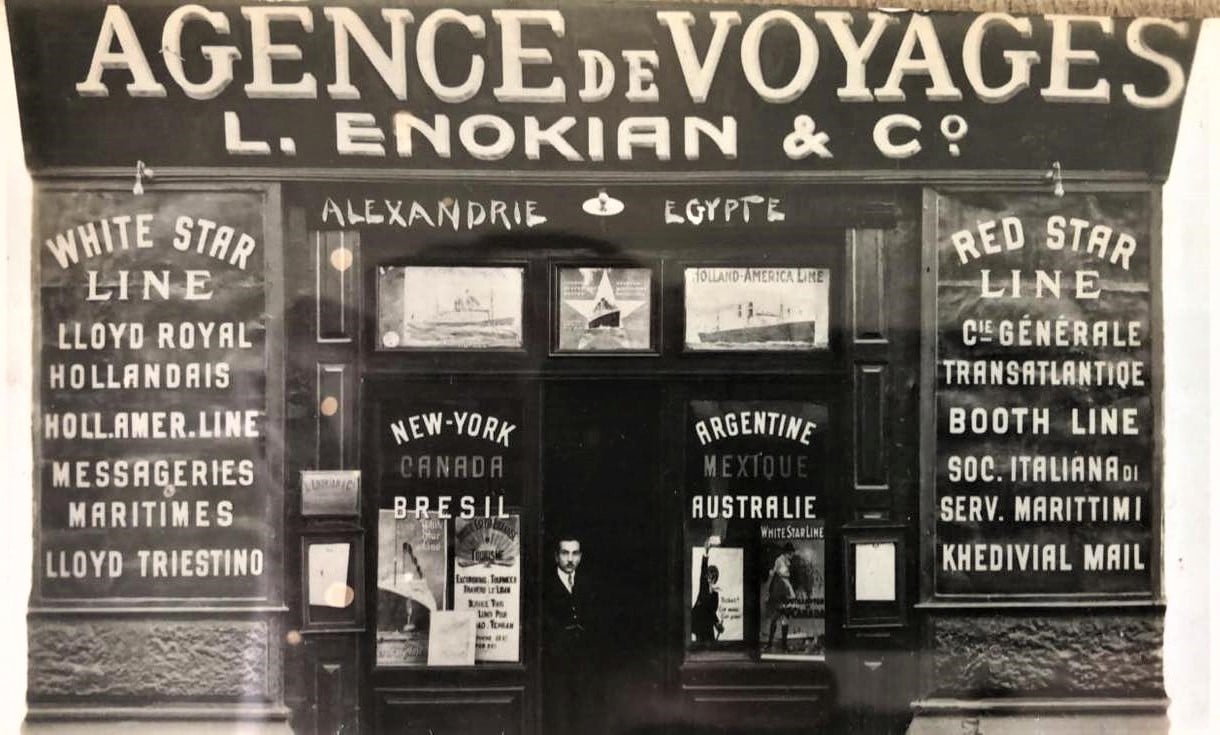 This is a very amazing story. After 80 years, the descendants of two families, who did not know each other, met by coincidence through Facebook and found out that their grandparents, were connected. 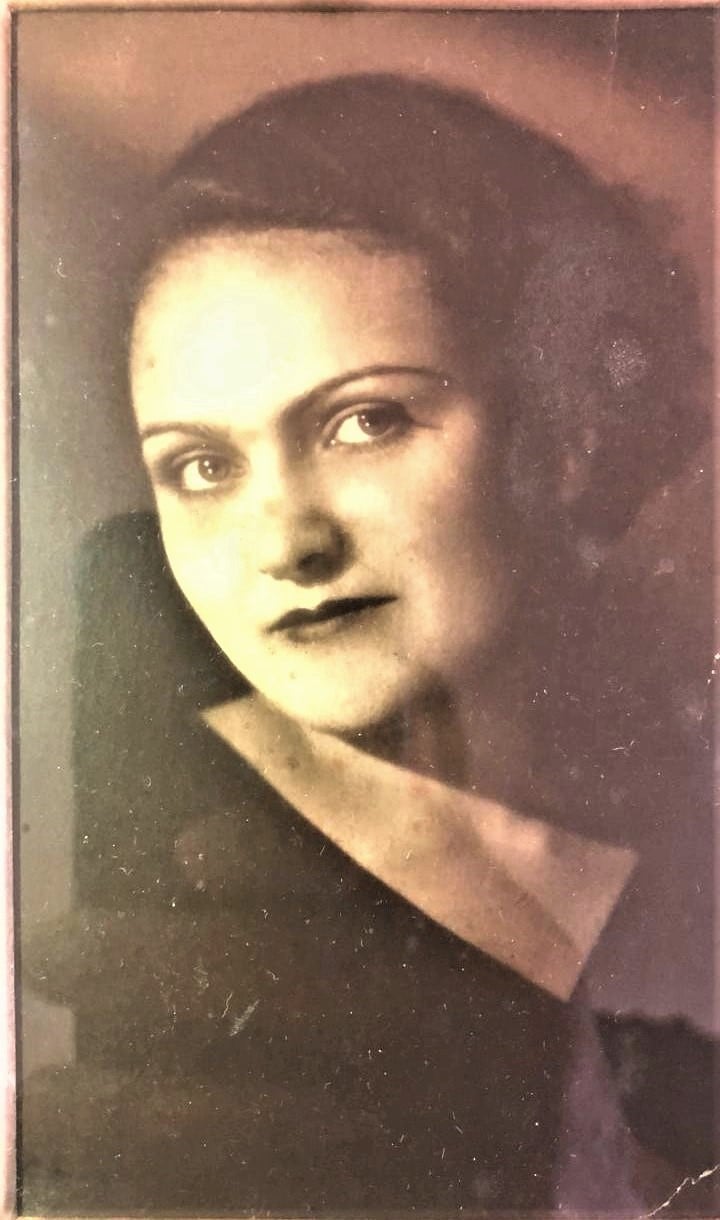 In Alexandria, Anna founded an Atelier de Couture and named it “Atelier Enokian” located at 9 Rue Fouad 1er, El Akkadine. Anna, herself a survivor of Genocide, hired young Armenian girls, whose parents had survived the Armenian Genocide of 1915, and who had fled to Egypt. She gave them the opportunity to work and care for their parents, hiring a total 150 girls. She was very compassionate and caring person but also firm and authoritative. Her staff loved her but also feared her.

As time went by, “Atelier Enokian” became famous and within its clientele, it included members of the Egyptian Royal family and Egyptian Aristocracy. The atelier was specialized in intricate needle work (Broderie) on blouses, skirts, hats and wedding dresses.

My late mother used to work at Atelier Enokian from age 14 until she got married. I remember very well the stories my mother used to tell about her exciting days in the atelier. Apparently she used to cut the hair of her teammates, and one day she was asked by her boss Mrs. Enokian to cut her hair too! She was terrified but managed to cut it to the satisfaction of her boss.

From there on, my mother Knar was one of Mrs. Anna Enokian’s favorite girls and even got a raise.

Anna’s daughter Anahid was a very strong willed women and a pilot. She worked in the atelier and assisted her mother in the running of the business. She gave birth to a daughter, Anna. 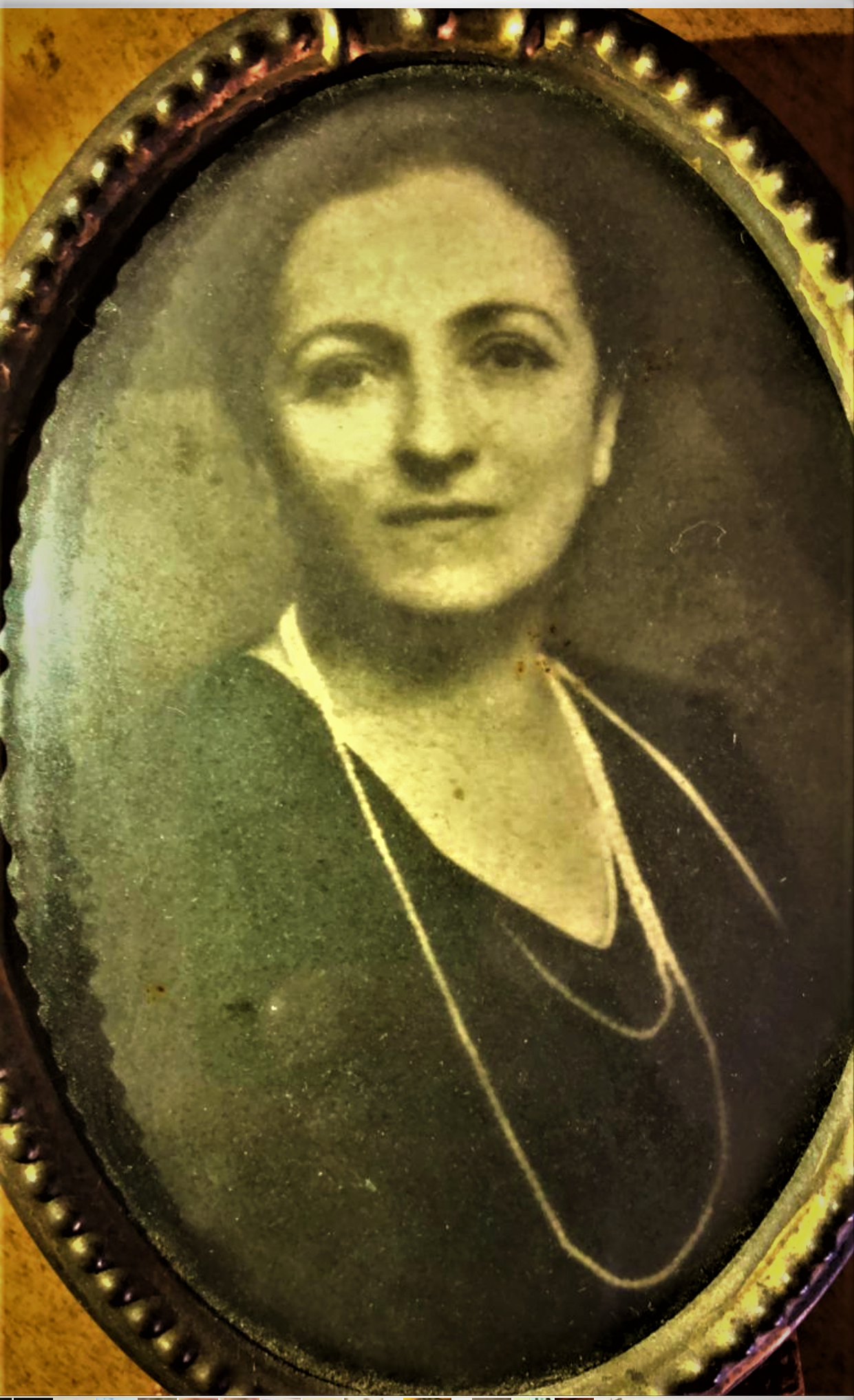 Anna’s grandson Serge Enokian was six years old, when in 1956, his parents decided to settle down in Lebanon. His father Noubar Leon Enokian, was an architect, his mother Lisette Fayad, was a Lebanese actress. Once a year, Lisette performed in a play and donated her share of income to the Armenian Church.

They all passed away but their legacy and their memory is still alive and remembered thanks to my friend Serge Enokian who recounted to me the family history and provided the photos. 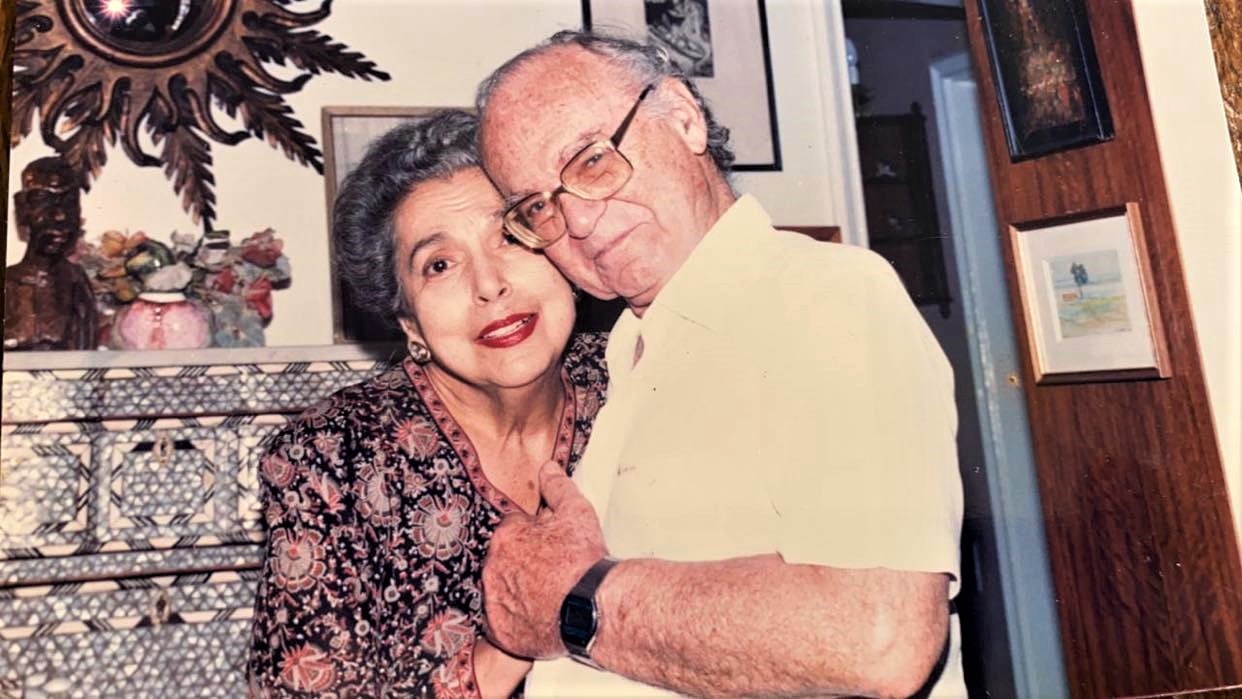 My mother used to say that her boss Mme. Enokian should have been recognized and honored for her support of dozens of Armenian refugees by providing the opportunity for them to work at her Atelier to support their parents who had fled the Armenian Genocide